Donald Rumsfeld once outlined the nature of knowledge and the danger of not knowing what you don’t know (http://goo.gl/4vWDQ). His infamous ‘known knowns, known unknowns and unknown unknowns’ description resulted in some derision – notably the Plain English Campaign gave Rumsfeld its Foot in Mouth Award in 2003 (http://goo.gl/YEzDrQ).

However, he also received some support given that he made something quite complicated fairly straightforward as it focuses our minds on the fact (and potential danger) of not knowing what we don’t know.

Financial planning can be full of unknown unknowns and therefore there are dangers which many could be oblivious to. Some dangers may simply simply be down to a lack of awareness – others due to misinformation.

A good example is the FTSE 100 – the leading index used (for some reason!) to provide a measure of UK investments. (The fact that only a very small minority of people will solely invest in the FTSE results in this being a dangerous barometer for investment returns but that’s an altogether different debate).

The FTSE100 index does not factor in dividends – a crucial part of equity investment returns. Using the FTSE 100 as a measure of investment performance is like putting your money in the bank, ignoring the interest and then asking why your money hasn’t gained in value.

Some equity indices (e.g. the Dow Jones) do include dividends and therefore comparisons between the Dow index and the FTSE is like comparing apples and pears (something I’ve warned about here).

Seemingly the FTSE 100 has therefore significantly lagged behind the Dow – however that is until dividends are factored in.

Once dividends are factored in, the FTSE 100 has actually delivered a gross total return of 61.5% over the period (whereas the Dow stands at 60.2%). 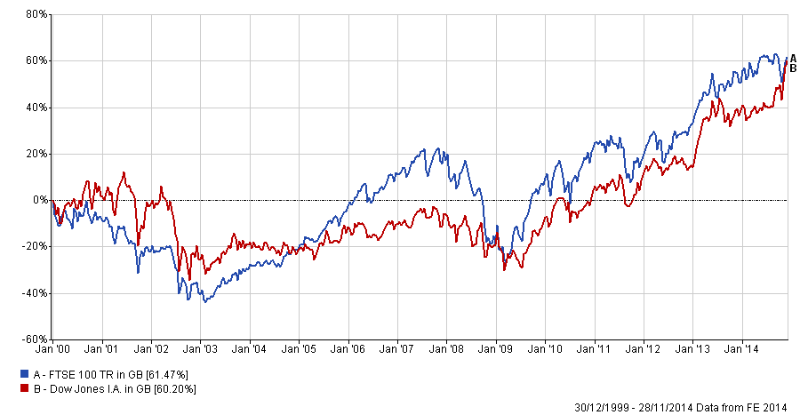 Investors therefore need to be mindful when reading articles about the Dow hitting ‘record highs’ when, from a capital return point of view, it’s actually lagging the FTSE – which, to date, has not yet returned to the heady heights of the Millennium!

In this media savvy, ‘here and now’ culture, sound bites can imply one thing when the reality is very different and it’s for this reason Mr Rumsfeld’s words provide a useful warning that things are not always as they seem – 2nd December 2014.